In 2004, Eurocom presented to the world one of the most creative new IPs with Sphinx and the Cursed Mummy for the sixth generation of consoles. It was incredibly unique and contained a fictional version of Egypt. Sadly, many watched the title and ended up being a diamond in the rough. Fortunately, THQ Nordic has given gamers another chance to experience this game on Nintendo Switch.

A journey through Egypt

When this game first came out, I remember begging my parents to let me rent it from Blockbuster this weekend. At the start, I was immersed in a world engulfed by Egyptian iconography and a huge world to explore. Loading the remaster made me feel the same feeling as it still had that nostalgic feel that the PlayStation 2 era had to offer. The graphics were noticed from the start, but for good reason. They don’t look clunky or full of polygons, as we often see when revisiting games of this generation. Now it’s obviously a remaster, but one that holds up surprisingly well, at least visually. The areas are not incredibly detailed like Assassin’s Creed: Origins, however, they still display the beauty of ancient Egypt through an early 2000s lens. There are many different areas that present multiple aspects of the world, such as the desert, pyramids, and cities, and they are all very pleasant to watch.

While the graphics hold up, some aspects of the game don’t. Save points are scattered all over the map, except that they are not readily available. Trying to find an area to record progress is usually at the beginning of the section and really nowhere else. Because of this, when death occurs, players are forced to start over from the beginning, resulting in lack of progress. The controls are not as tight as they could be either. During platform sections, it is difficult to estimate jumps and where the true edge of a platform is, which makes some sections much more frustrating. Finally, there is no mini-map to tell where you are going, so be prepared to get lost as you try to see the world at your fingertips. 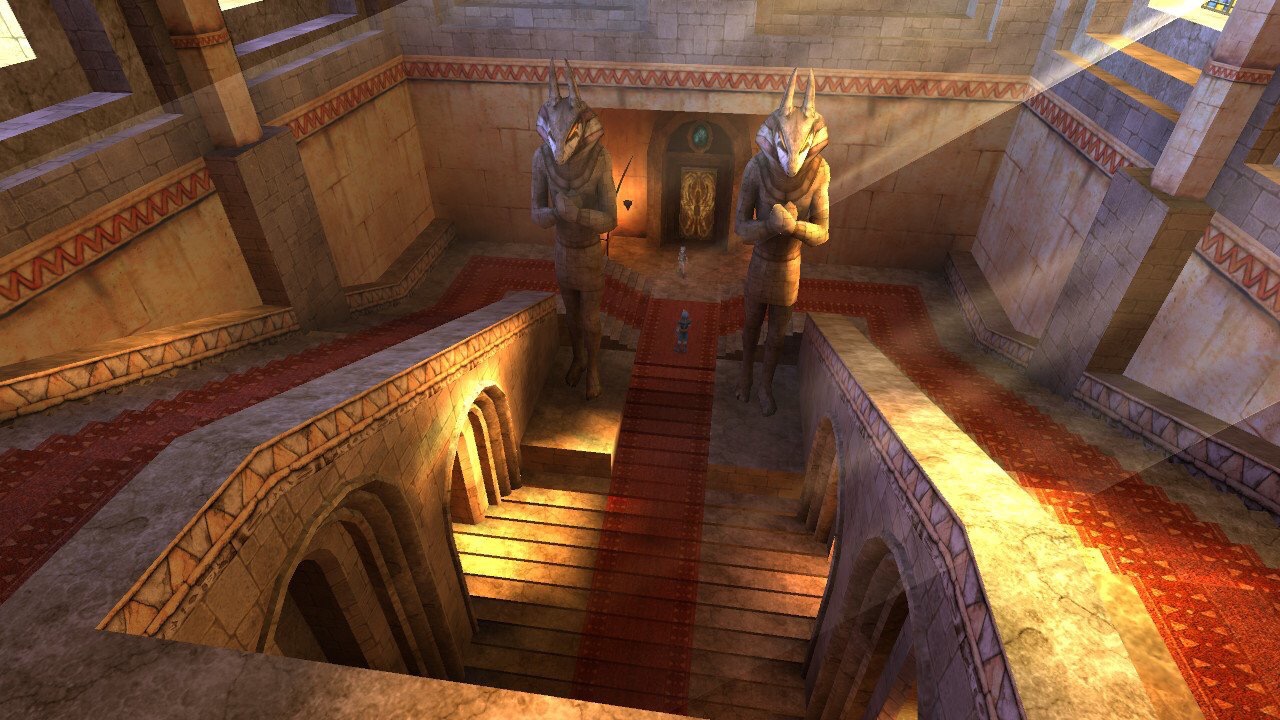 What sets this game apart from other action-adventure games is its long and immersive storyline. Lasting just under 15 hours, players should be prepared to invest their time in this title. When you first hear about the story, it sure sounds a bit generic, but once it pops up there is more than it seems. Take control of Sphinx as he attempts to find the stolen crowns of Egypt in order to stop the evil Set from taking over the world. Along the way, he meets a mummy capable of solving puzzles, while Sphinx fights against his enemies. As the story progresses things get complex but it takes time to get there. As it takes place in ancient Egypt, many characters are noticeable to anyone who knows the history around them. King Tutankhamun and Imhotep are just a few.

Sphinx and his friend, the Mummy, make this journey together, so they have to rely on each other to get through different sections. Each of them has different things to offer. Sphinx is much more focused on action and exploration, while the mummy focuses on stealth and puzzle solving. The game is roughly a 75/25 split in favor of the Sphinx character. As a result, when the character change occurs, it allows the game to move forward instead of dragging on. With a game spanning over 10 hours, there has to be at least some gameplay overhaul and luckily this title does.

While both characters help keep the game interesting, they have a fair amount of issues in the way they play. When he controls Sphinx, his fight is pretty dull. It’s very compact without containing any combos, dodges, or parries. Trying to use a shield for self-defense is also incredibly tedious as you’ll have to navigate a menu before using it, so don’t expect to use it unless you’re stationary. The mummy, on the other hand, plays very similarly to the Sphinx, except without weaponry. He uses the fact that he’s dead very well in that he can absorb things like electricity and fire to solve problems. It can sometimes slow down the game, but it is necessary and its puzzle sections become complex and huge. The main problem the two characters share is the lack of knowing where to go. No minimap or objective is shown, making many areas confusing and complex. Keep in mind that this is an older title and doesn’t tell users where to go, making exploration and discovery the key. However, this aspect of the game is aging quickly and could benefit greatly from this inclusion. 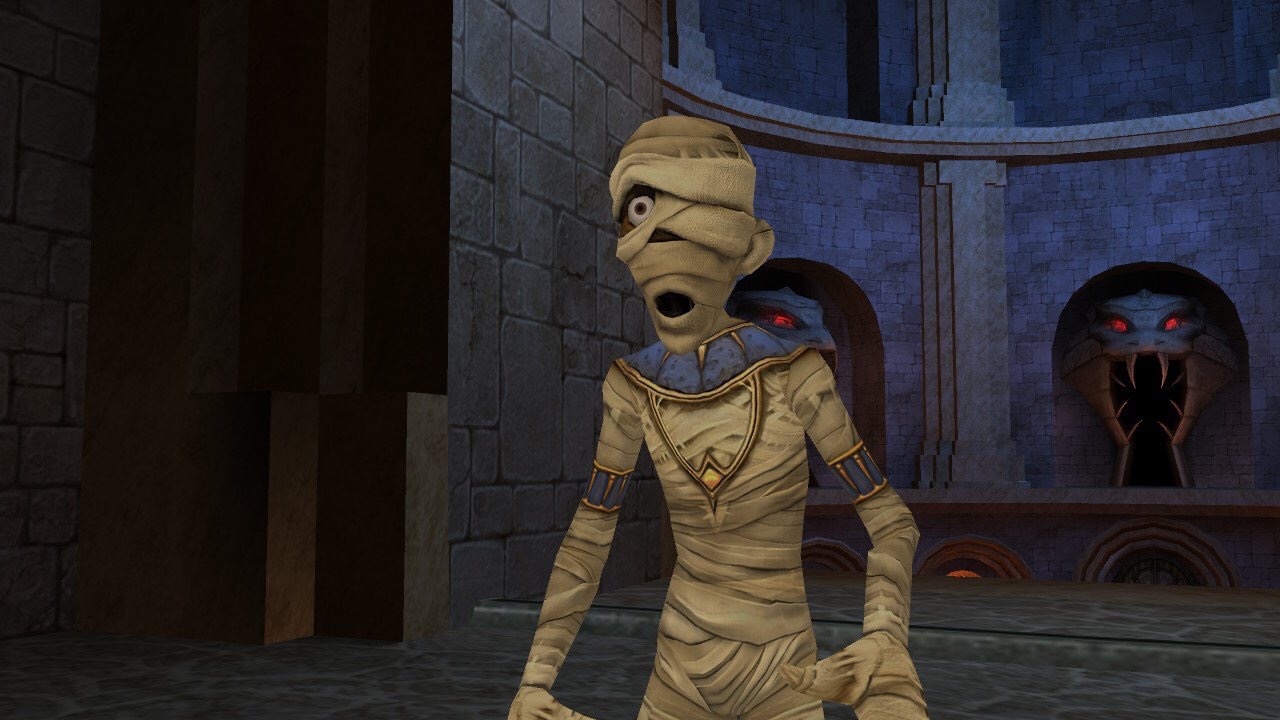 Sphinx and the Cursed Mummy works great on Nintendo Switch console. Not once have there been any bugs, slowdowns or framerate drops during my game. The gameplay was smooth and never had too much on screen at once. Plus, the title never crashed or forced the system to speed up its internal engines. The transition from docked mode to portable mode also didn’t result in any extremely noticeable changes. Both versions were smooth and contained the same graphics without sacrificing performance issues. It’s a very solid port that’s improved on the Nintendo Switch, thanks to its graphical improvements over the original, and of course, playing it by hand. 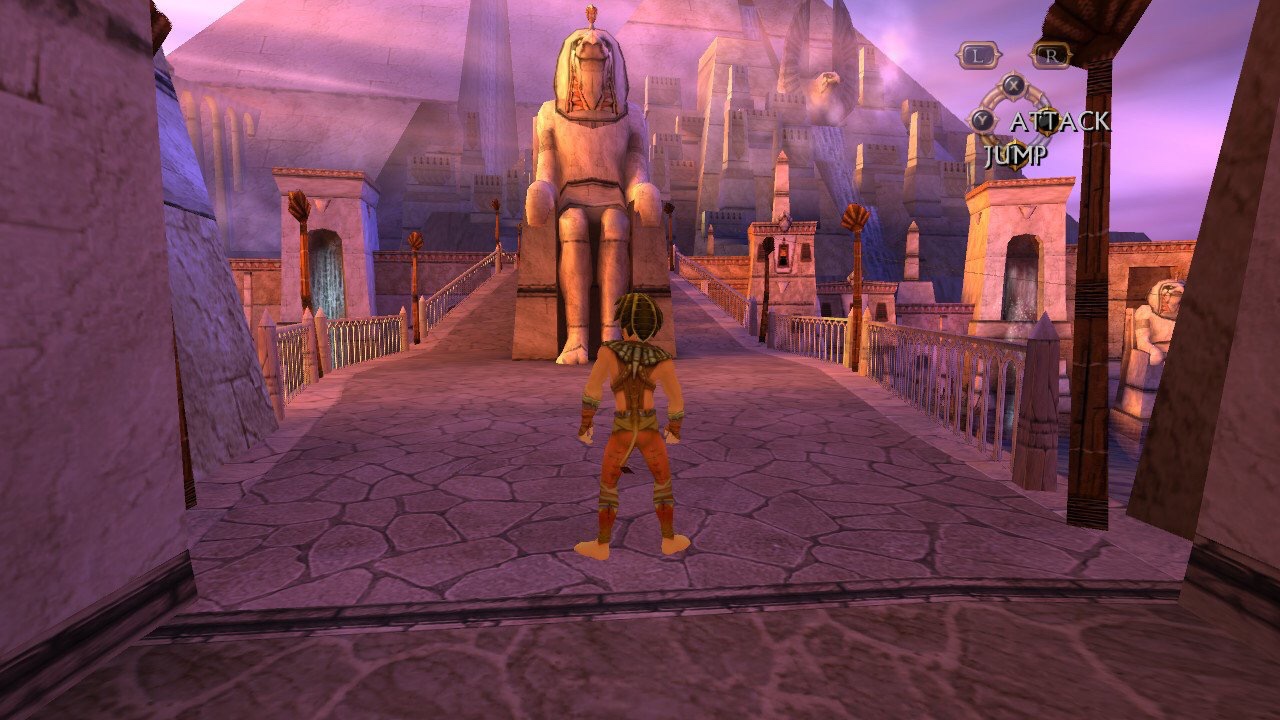 The 2004 version of Eurocom can now be appreciated by a wider audience, thanks to this port by THQ Nordic. It’s a very enjoyable game that rushes into a vast world engulfed by the culture of ancient Egypt. With two characters offering different play styles, the long journey to the end can be rewarding and fun. While its setbacks were a big factor in the fact that this is an older version, like the save points and the lack of a minimap, there is still a lot of fun to be had. Sphinx and the Cursed Mummy is by far one of the most criminally overlooked games of the sixth generation, but luckily gamers are fully able to rediscover this hidden gem.

Thanks to THQ Nordic for providing us with a review code!

Sphinx and the Cursed Mummy is an enjoyable experience from start to finish, but not without a few issues along the way.