Monster Hunter is one of those series you either get it or you don’t. “What is this game about? The only answer may be “Monster hunting”. Imagine a game where you ready your weapons, forge new armor, meticulously study your inventory, then engage in a battle of attrition against an electric wolf until one of you falls. You use the environment, including its endemic life, like bugs you can spread like caltrops, you use the very walls of the arenas you fight in to avoid great crashes of lightning and claws that would scorch the flesh and break bones. of an ordinary person. You, however, are nothing ordinary: you are a hunter, and once you bite into Monster Hunter Rise, you will experience a game that uses three-dimensional gameplay in an extremely satisfying that will keep you coming back for more.

For those unfamiliar with the Monster Hunter series, they’re third-person action games that focus on learning about your opponent – usually big monsters that you have to hunt down and kill or capture. The series plays more like a series of boss battles, where you encounter a large enemy, gradually wear them down, and break parts of them to make their attacks less effective, such as cutting off a monster’s tail to reduce the range of their tail attacks or damages the head or chest so the monster has a hard time breathing fire at you. Monster Hunter isn’t like a beat ’em up where you run and mash buttons – you watch the monster, dodge attacks, and then use their attack openings to use your own attacks. The general gameplay loop is that you hunt a new monster, then take its fangs to craft your new weapon and its hide to craft new pants, then use them to more effectively defeat the next monster you encounter. 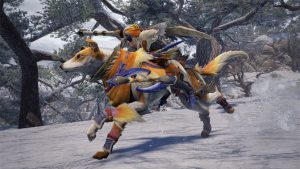 Now, for those familiar with the Monster Hunter series, Rise features a wide variety of quality-of-life improvements, just like its predecessor, Monster Hunter World. Gathering herbs or mining ore from an iron vein is one smooth move in one, rather than requiring you to hold the button down for several seconds to pick up your items. Most of the changes are made so that players spend less time than ever just watching stationary hunters collect resources – Rise wants you in, kill the monster, get out. There’s also the new Palamute, a hunting dog you can ride into battle like a lovable steed, alongside the usual Palico partners we’ve had for many games in the past.

Some of the new additions are the Silkbind wirebug system – players usually have access to two wirebugs at any one time. You can use them to launch yourself into the air like Spiderman, but you can also use them to perform powerful attacks during combat. Wirebugs improve both in-combat and out-of-combat maneuverability and function as a cooldown system for powerful offensive and defensive options when fighting a monster. Dealing damage while airborne or using a Silkbind attack to damage a monster will eventually put the monster into a state where you can use the wirebug’s silk to harness and control a monster, allowing you to jump onto a Tigrex to knock a Rathalos out of the sky , or simply smash the controlled monster against a wall to knock it down momentarily. The new mounting system is a good compromise of the one implemented since 4U, but gives you more control over what happens with a monster than Iceborne’s clutch claw gave you. 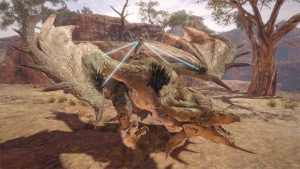 Those of us familiar with Monster Hunter World might remember World’s endgame, before its Iceborne expansion was released. In World, once you beat the ultimate hunt, you either pledge to hunt tempered monsters to increase the chance of getting rare decorations, to add powerful new skills to your armor sets, or you are engaged in post-launch content like the mighty Arch Tempered monsters. Rise’s system differs from World’s, introducing Rampage mode: a tower defense-style quest where you defend Kamura’s village against repeated waves of frenzied monsters.

To defend the village, players can set up ballistae, cannons, even artillery weapons that can be used to fend off invading monsters. There are sub-objectives to complete which will unlock even more powerful tools like machine guns and even powerful villagers. The objective of Rampages is to fend off attacking monsters without allowing invaders to destroy the gates leading to the village. At the end of the Endgame Rampages, you’ll usually encounter a very powerful villain near the end of the Rampage, such as an Elder Dragon or the wild Apex monsters that feature attacks similar to Generations Ultimate’s Deviants. 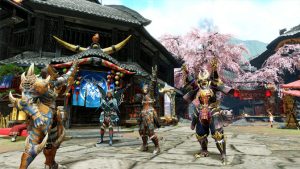 Each weapon in Monster Hunter essentially controls like a completely unique character in a fighting game – Sword and Shield play differently than Spear which plays Heavy Bowgun differently. Rise actually increases the variability between weapons by introducing a new Switch Skill system, which lets you change two regular weapon actions and one Silkbind action, along with new unlockable abilities. A Bow player, for example, can use the charge sidestep to dodge attacks and deal big damage on your next shot, but it has a pretty high stamina cost, so it might leave you without the ability to dodge a large incoming attack. Conversely, the Dodgebolt turns your side step into a close range melee parry attack that only increases the damage of your next arrow if you successfully parry incoming attacks. Many weapons have switch skills that open up new gameplay paths or increase a weapon’s skill cap.

Each weapon’s Silkbind actions also open up additional gameplay paths. Outside of combat, you use your wirebugs to move across the sky to reach destinations faster, but wirebugs can also be consumed during combat to perform new attacks that aren’t too dissimilar to Hunter Arts from Generations/Ultimate , with some of the moves being returning arts from that game, such as Longsword’s Sakura Slash. 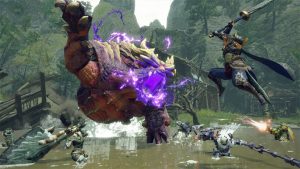 Outside of the new mount system (I’m Mounted) and Switch Skills, this is Monster Hunter as you know it. Players who jumped into Monster Hunter World may find some of the new options jarring, as customizable radial menus give you easy access to much of your inventory, collecting items takes virtually no time now, and there’s still no need for things like Psychoserum and Paintballs to track monsters through shrine ruins or flooded forest. However, these additional minor improvements make the game much more accessible for players new to the series and reduce the initial grind from game to game, which is much appreciated even from the perspective of a veteran who has started with Freedom Unite on PSP.

For a game ported to PC from the Switch, Rise is very impressive, visually. There is some form of magic under the hood of this game and that cannot be underestimated, as although the textures are muddier than what you would see in World, the characters and environments are beautiful and not slowdown victims even on older GPUs (which, good luck finding a GPU in this age of bots, scalpers and crypto farms). Rise runs surprisingly well on my now aging computer system, which has a Ryzen 9 3900x processor, but a much older GTX 1070 graphics card. Visual performance is a smooth and consistent 75fps at 1440p, with high resolution textures and a 50% improvement in image quality, to boot. This game doesn’t look as pretty as World, but it runs significantly better on high settings with no framerate in sight. 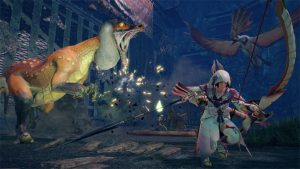 Rise’s music is fantastic, assuming you enjoy Japanese-themed soundtracks. Tracks like the shrine ruins encounter theme use shamisen, shakuhachi and orchestra, giving it a very distinct Japanese sound. Each environment in the game has the same warm or bright approach to its tracks with these instruments, and it fits into the orchestra in a very unique way that is immediately appealing. Even existing monster themes like Zinogre or Mizutsune have been given an Eastern overhaul, with sung chants included in multiple tracks for maximum impact.

Rise on PC drops with all the content from the Switch version, so there’s no waiting to unlock your Hunter Rank cap or anything that Switch players have had to deal with, thankfully. Various Elder Dragons and Apex Monsters were added to Rise after release, and all are available for you to hunt on PC once you rank up enough to hunt them, no need to wait for title updates. The improved visuals and silky smooth frame rate of the PC version actually made it difficult to return to Rise on Switch, and thankfully when the main rank expansion Sunbreak was released (Iceborne’s equivalent for World ), Switch and PC should have unified content drops. This of course means that if you want the best visuals and performance over portability, which version you choose is a no-brainer.

All in all, Monster Hunter Rise is a fantastic entry in the series, with an excellent PC port that runs surprisingly well on older hardware. Rise is welcoming enough for newcomers to dive into without getting overwhelmed, but has enough new options and gameplay elements that veterans should find plenty to enjoy as well. After all, what’s not to love about a game that lets you wield two swords, shoot a string at a monster, and Beyblade on its back like you’re Levi’s. Attack on Titan? This is one thing you can do with your Silkbind attacks in the game. Seriously, go play it, Rise is fantastic.