Jamie Skelton from PORTMARNOCK is a professional magician and mind reader who recently won the coveted 2022 ‘Artist of the Year’ award from Weddingsonline.ie

He performs throughout Ireland at company parties, private events and weddings.

“My first paid gig was a street party which made me £50!” Jamie tells Northside People.

“After that I started doing private parties, weddings and eventually bigger and better gigs.

“The last two years as a professional artist have been interesting to say the least.

“I went from being out of work due to Covid to being my most successful year in 2021 thanks to performing virtually all over the world, to winning this award after the pandemic!”

Jamie pictured after receiving his Entertainer of the Year award

So let’s go back to the beginning.

Following Jamie’s early introduction to the world of professional entertainment, after his Leaving Cert, he studied Marketing and Business for 4 years at DIT before earning a 1.1 Honors degree.

“My interest in consumer psychology combined with my knowledge of magic helped form my unique brand of psychological illusion,” says Jamie.

“My studies also helped me with the business side of things and to this day I take the business of show business very seriously.”

After college, Jamie was the first magician to perform on the hit show “Ireland’s Got Talent” where he got a yes from all four judges. 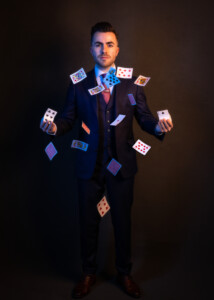 His audition has since gone viral online, garnering over 6 million views, and cementing his position as one of Ireland’s most exciting acts.

“The day after I appeared on Ireland’s Got Talent, my phone was exploding with emails, calls and texts,” says Jamie.

“I was getting calls from companies like Google and Microsoft wanting to book me for their upcoming corporate events.”

Just as things were really starting to take off professionally for Jamie, the Covid pandemic decided to kick in.

“I had lots of reservations and then suddenly I had none left!

“Then came 2021 which was my best year and I didn’t even have to leave the house!

“I have been contacted by many corporate clients via Linkedin.

“They wanted me to do shows through Zoom for their employees.

“Before long, I was busier than ever doing online gigs for offices around the world, everywhere from the United States to Kazakhstan to Ukraine to Spain.

“I was doing several gigs every day, from the comfort of my own home!

“I think Zoom is a great way to do my kind of shows because they’re very interactive.

“It can be harder for musicians to perform on Zoom because the sound doesn’t always do them justice.”

Jamie is now happy to be back in person, but still offers online shows.

“Next week I’m going on vacation to Italy, but I’m going to work a bit because I have an online concert that I will be doing from my hotel in Rome.”

Then last week came the news that Jamie had been crowned Entertainer of the Year at the coveted 2022 Weddingsonline Awards which were announced at a gala dinner at the Mullingar Park Hotel.

“It was my first year signing up and I was shocked to win to be honest!” says Jamie.

“I’m honored that they gave me the Entertainer of the Year award and I can’t wait to see what’s in store for me.

“Right on the back of that award, I was booked for three weddings the next day!”