The inventor of Sky Surfer grew up here, graduated from HHS

Good Morning America viewers were probably amazed to see a 2.5-minute feature film about the young inventor of something called Sky Surfer, who was shown wearing the Engineer. And locally, some people may have jumped out of their chairs and said, “This kid is from Hendersonville! “

The inventor is Hunter Kowald, 28, who grew up in Hendersonville and graduated from Hendersonville High School in 2011.
The Good Morning America segment showed Kowald flying 30 feet above the ground in Times Square on his Sky Surfer, his feet fixed on platforms above eight small helicopter-shaped toros, a remote control mechanism in his right hand.

The ABC reporter opened the segment by jokingly asking Kowald if he was Spider-Man’s “Green Goblin”.
“I think it’s everyone’s dream to fly since they were little,” Kowald replies. He built the machine by hand for thousands of hours, using his math and engineering skills and training from UNC Charlotte.
“This thing uses 1600 amps of current,” Kowald says. “It’s a lot of power. This is about 8-10 houses all operating at the same time. 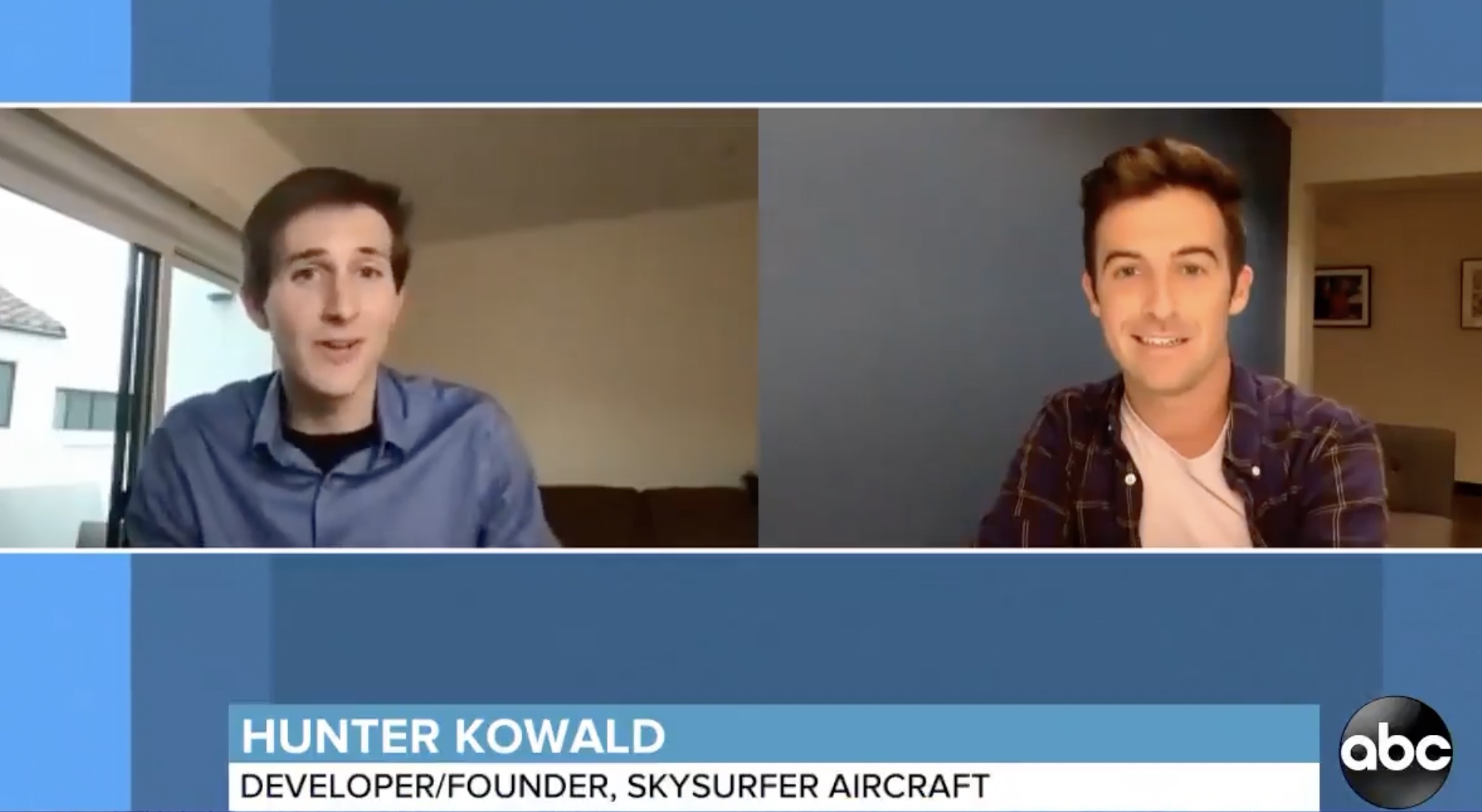 Hunter Kowald is interviewed on Good Morning America. [SCREENSHOT FROM GMA]Video shows Kowald sailing above the city, passing neon signs and landing on the roof of a McDonald’s.
“People see it and they think, ‘Oh maybe that looks a little dangerous’ but I’m actually super stable, like I’m standing on the ground, especially once you’ve got the right training. “
“Basically I snowboard, dance with my right arm, and parachute with my left arm and kind of bend over – so a bit of all of those things,” he replies when asked if the sky surf is like a jet ski or a Segway. “Once you get the hang of it, it’s so intuitive and it’s calm and relaxing.”
Kowald is the only person in the world with a Sky Surfer, says the GMA reporter, and he imagines practical applications that could make his invention take off.
“It could be used in emergency situations (or) for rescue,” he says. “I think most people want them for recreation. It’s definitely a fun thing to play with.
Son of Stephanie and Brian Kowald, Hunter grew up on Greenwood Drive near NC 191 and is a product of the Henderson County school system. He and his older brother, Alex, developed a passion for creative engineering as members of the Henderson County robotics team, reaching the regional finals in 2008 when Hunter was in grade one and Alex was in grade two. at Hendersonville High School. Called “Amperage,” the team worked nights and weekends to design and build a robot capable of throwing a giant red ball above or below a 6ft 6in viaduct.
Although Kowald won’t say the sequel, he teased in the GMA feature that his company had “surprise content coming up.”